The most fascinating race in Greece for 2016, the Corinth Canal Paddle Crossing on October 30th, was a huge blast. This year except the 163 SUPs that crossed the Canal for the 6th H.S.C., organizers in cooperation with Hellenic Canoe-Kayak & SUP federation, invited athletes from all sports that H.C-K.F. represents (canoe, kayak, surf-ski, SUP) to join and the outcome was a BIG success. More than 300 participants in all disciplines flooded the 6.343 meter long Canal of Corinth for the “straightest race of the world” as it has been known.

The Canal carries more than 2.500 years of History, when tyrant Periandros (602 B.C.) tried to open the canal, but failed. It was around 400 B.C. when Corinthians structured “Diolkos” (a paved trackway which enabled boats to be moved overland across the Isthmus of Corinth in order to avoid sailing around Peloponnese). Remnants of Diolkos still exist next to the modern canal. Many attempts followed with no success, until 1893 when the first boat crossed it after 11 years of work. Until today the canal has been a trademark for the region but also for Greece and its history. 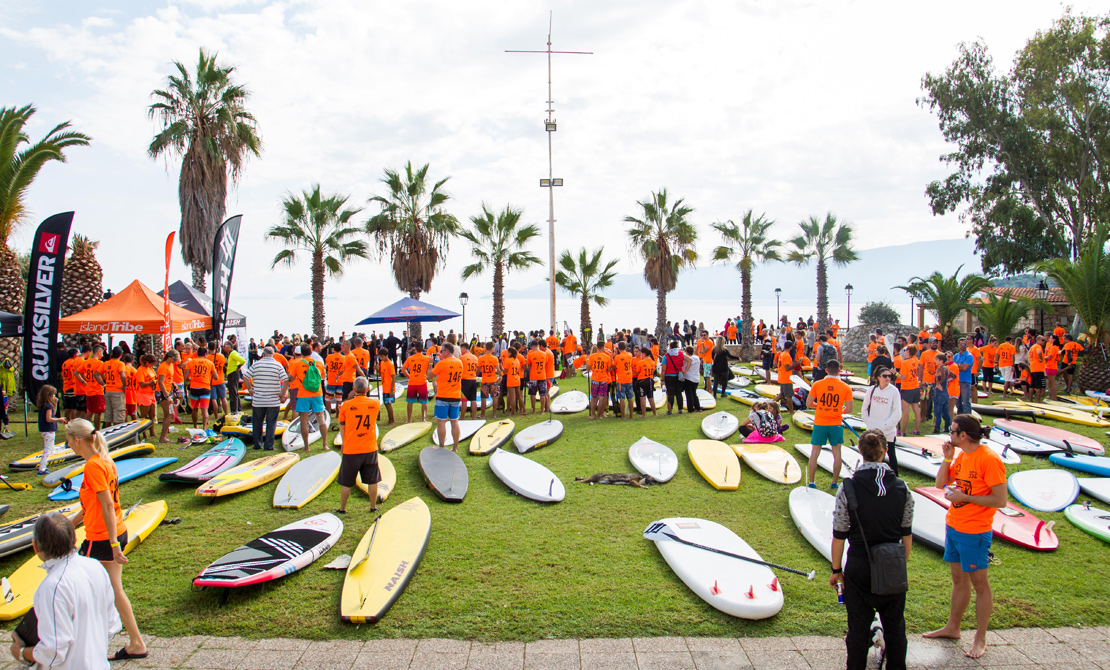 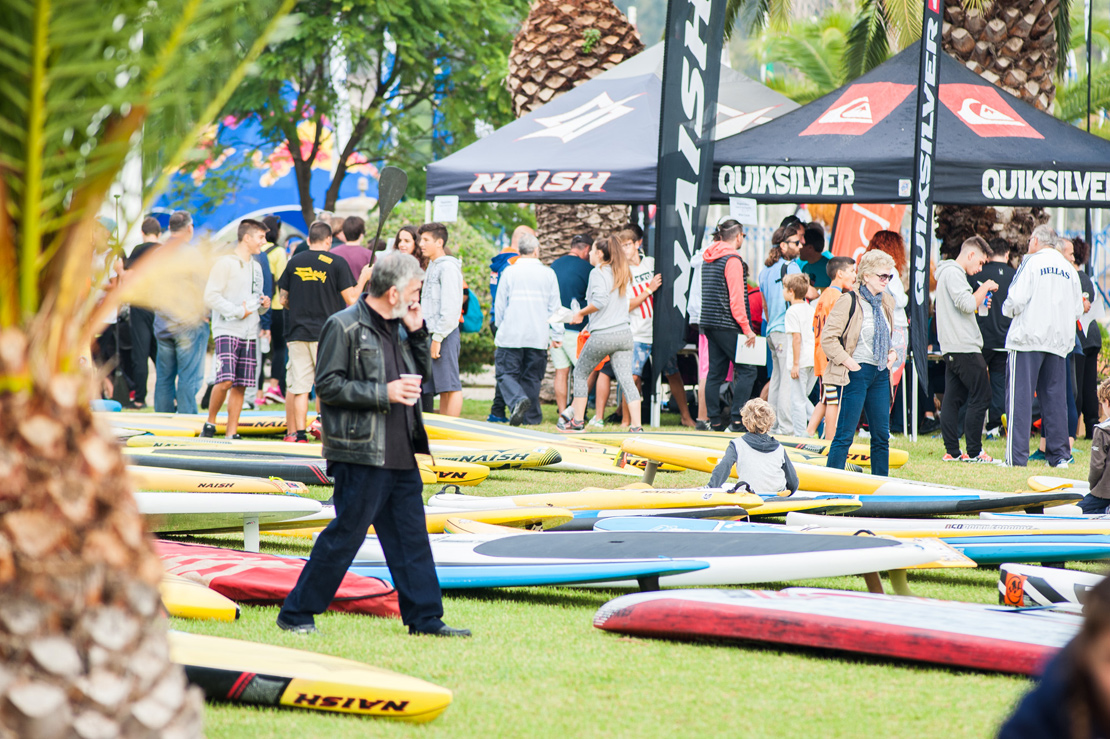 The beautiful garden of A.E.DI.K. (Administration Offices of the Canal) was the meeting point and also the entrance point to the starting line. The control tower stopped the vessel traffic and gave the green light for all athletes to enter the water. After a short briefing to participants, referees, safety crew and everyone that was involved, the biggest fest of all Paddle Sports in Greece…Started!! 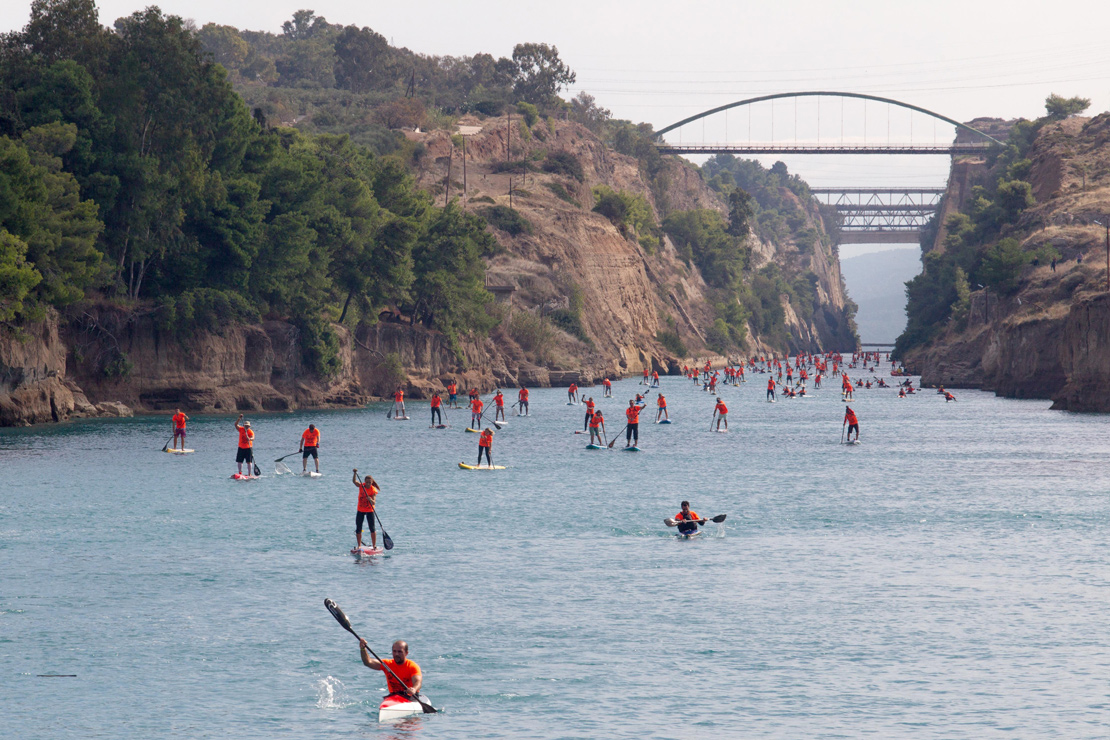 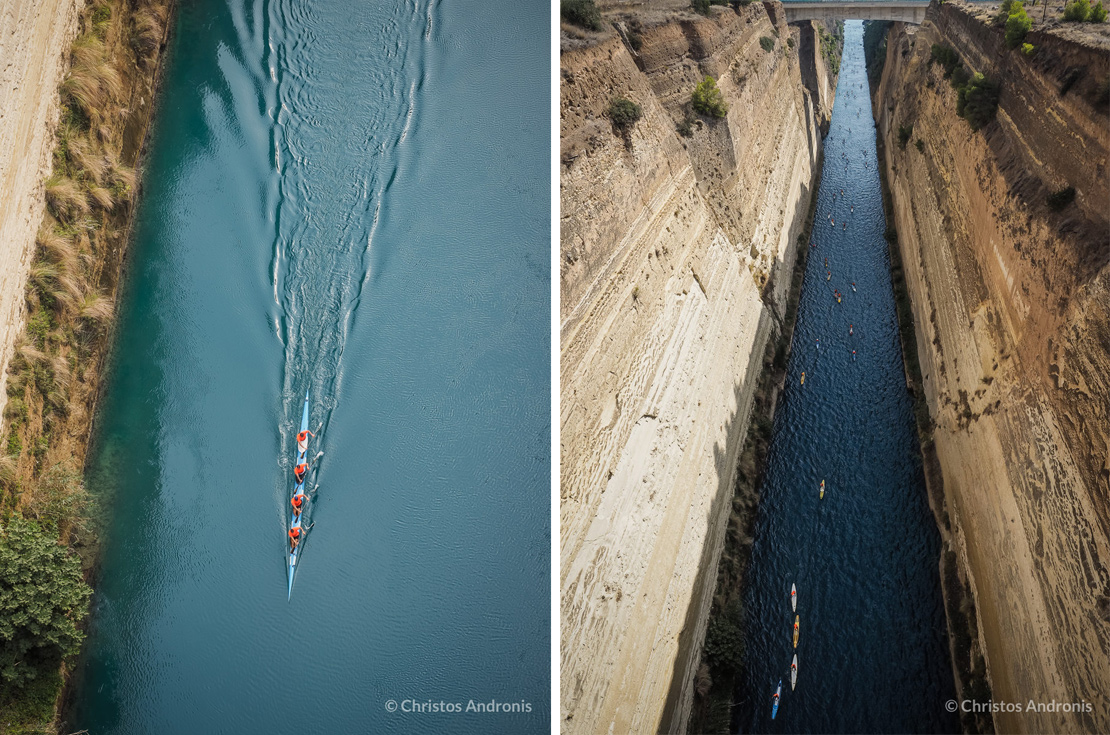 In the 14’0” foot category, Nikos Syrigos(Naish) , Zahos Koumoudiou(Naish) and George Andreopoulos(Cohete) got in front early and lead the race all the way until Koumoudiou after a sprint in last 200 meters managed to overcome Syrigos who was in the lead, finishing finally in first place. In 12’6” foot category Phaedon Doukas (Naish), George Giginis(Naish), Christopher Bullant(Naish), John Tountas(Cohete) and George Kleinakis(Naish) started really strong making a distance from the rest. Doukas took the lead and the win, making a safe distance, with the rest four, battling really hard for a better place. Last starting was for the SURF category with George Kosmadakis(Naish), Manos Mavrommatis(NSP) and Dimitris Soukoulis leading the race ,finishing  also in the same order. Epic battles were given in each and every category. Only one was the main result, everybody finished with a big smile on their face. 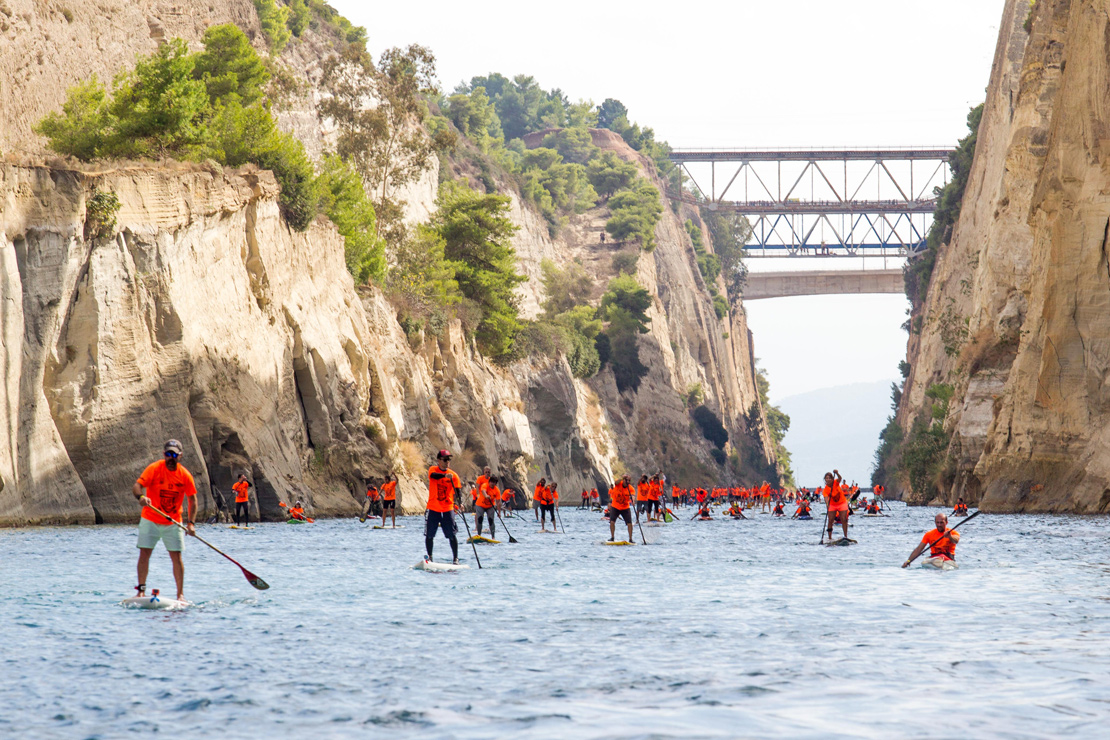 The image of this Historic Canal, flooded with paddlers of all kind, is something unique and only those who were there can feel the overflowing emotions and the awe that generates the crossing under the massive 80m high walls of the canal. Either participant or spectator could feel this as the energy and the tension were at high levels.

Organizers would like to thank every paddler who traveled across every corner of Greece (Parga, Xanthi Patra, Kriti, Kefalonia,Kalamata…) and those from Cyprus, Denmark, U.K. , Slovenia, Germany and participated in these races helping to raise the level of Greek Sup race scene. 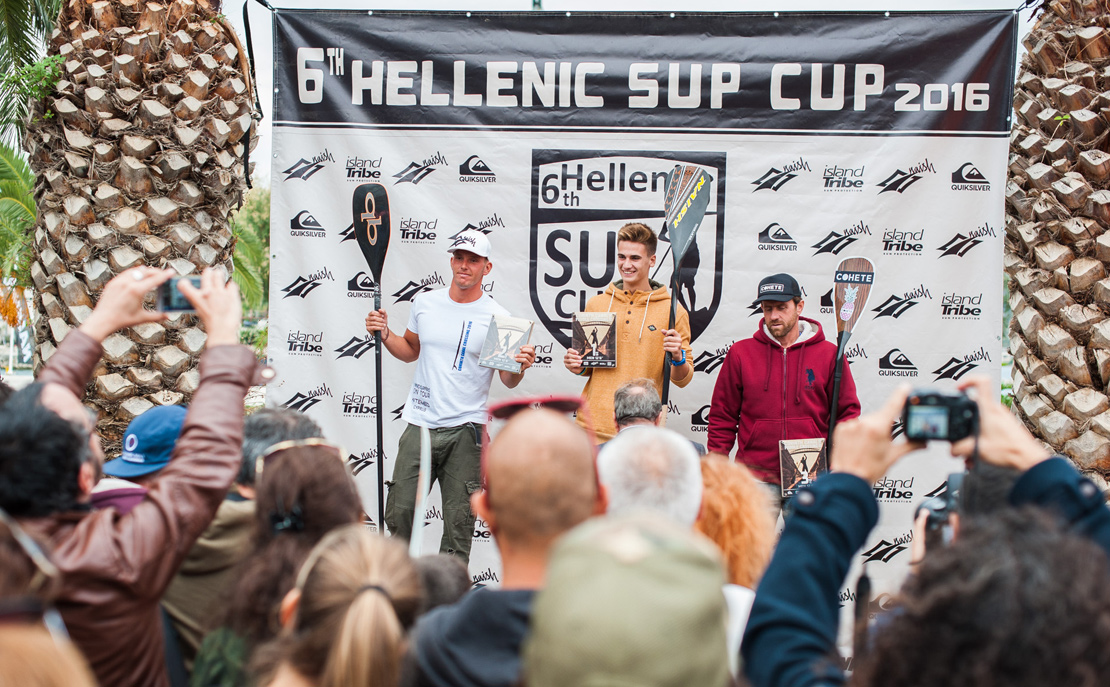 See you all next year

Long glides to everyone 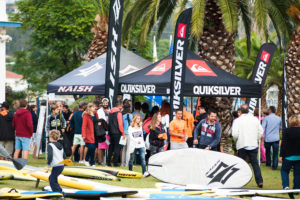 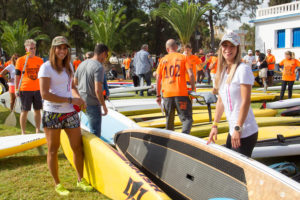 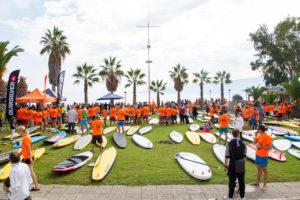 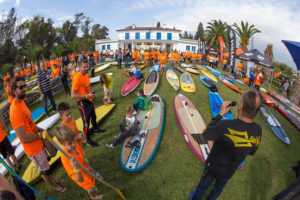 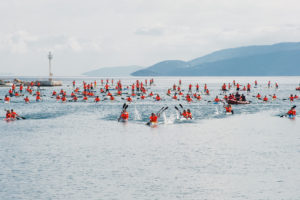 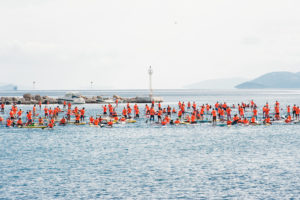 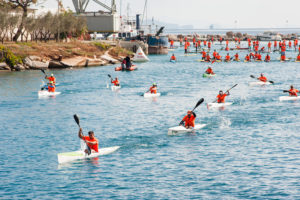 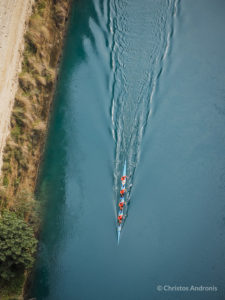 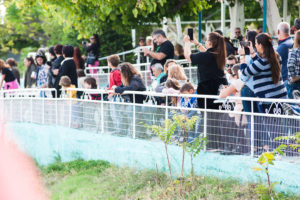 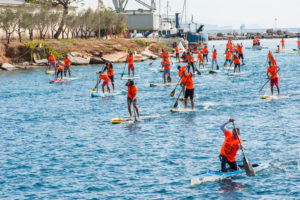 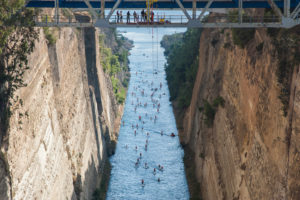 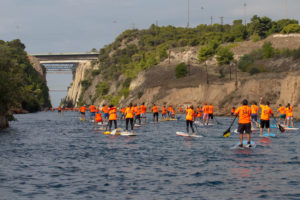 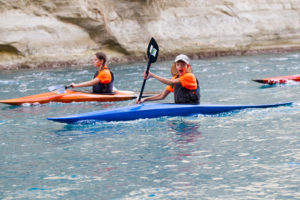 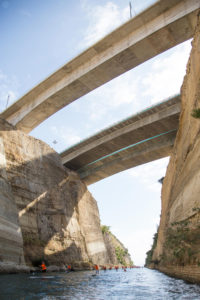 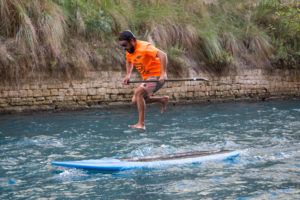 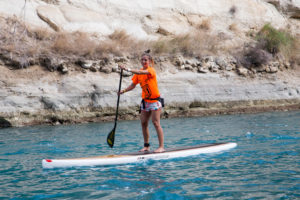 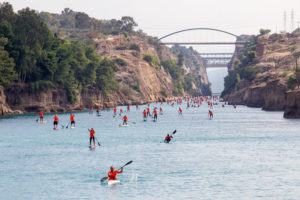 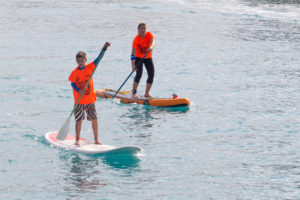 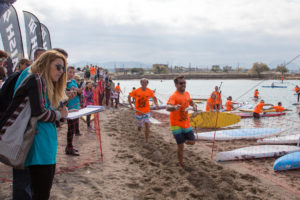 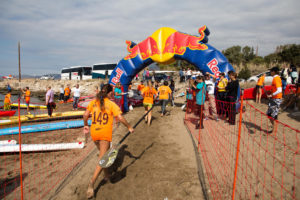 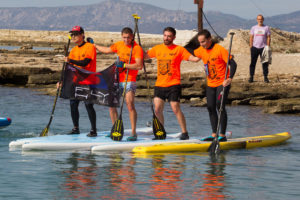 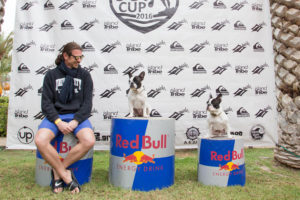 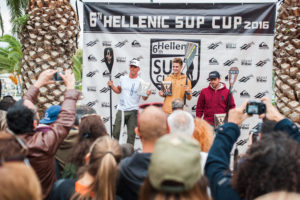 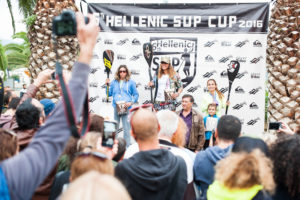